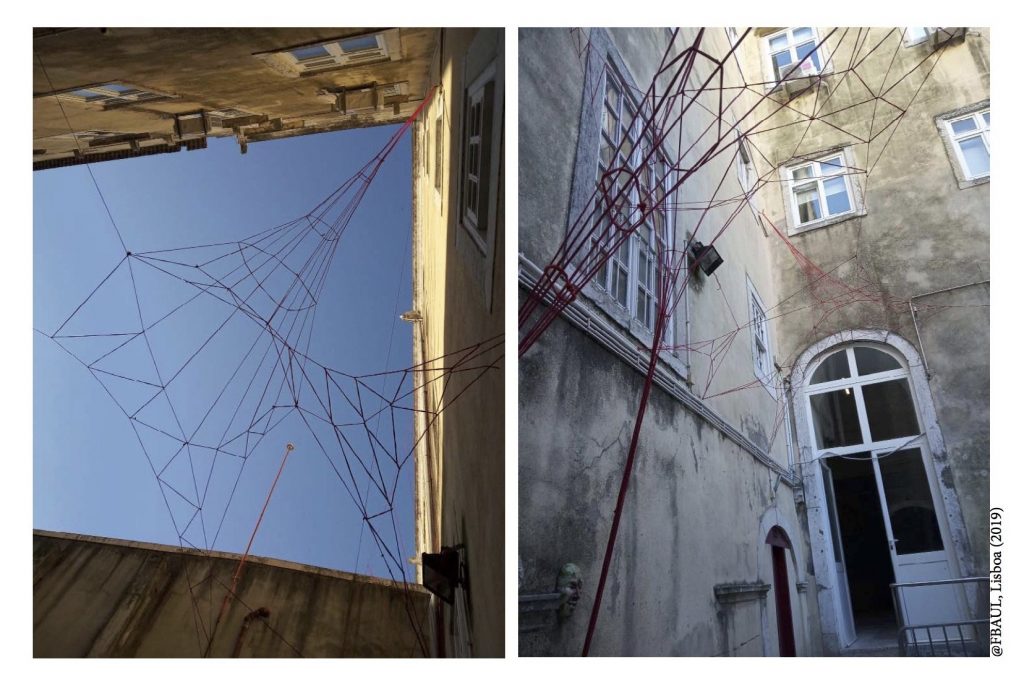 A HOME MADE BY DRAWING is an art-research and anthropological project exploring the human practice of dwelling, the notions of home and shelter, and the meanings and quandaries of human mobility. Beyond the purely architectural and formal interpretations, the project investigates the dialectic between ideas of home and horizon, openness and closure, finite and infinite that generates a constant, ambiguous and unsolvable movement between contraction and expansion, between staying and leaving.

Created by artist and cultural anthropologist Lorenzo Bordonaro, A HOME MADE BY DRAWING explores non-static and fluid manners of dwelling that evoke an alternative and nomadic relationship between human beings and their environment. The architectural materialization of this condition is the temporary shelter, in which a thin, fragile dividing and permeable frame separates an internal environment from the outside space. This temporary and ephemeral way of dwelling is embodied in alternative and non-formal building techniques, in some vernacular architectures, in temporary shelters built by homeless and refugees, as well as in shanties at the periphery of the global cities.

In A HOME MADE BY DRAWING, Bordonaro creates symbolic nomadic structures through ephemeral, fragile and impermanent architectures that embody this oscillation between the need to take shelter and the drive to move beyond, between being oneself and becoming other, between the home and the drive or need to travel. These achitectures are therefore ‘nomadic shelters’, symbolic dwelling forms from where to start rethinking the relationship with the environment and with the landscape, acknowledging mobility as fundamental feature and right of human beings.

At a highly dramatic moment in European politics as regarding refugees and migrants’ status, from the 2ndto the 14thof December Bordonaro will create ‘shelters’ in selected public spaces of Treviso as architectural symbols of a new much-needed global ethic, using a simple cotton thread in performance-like actions. The end of the residency will be marked by a final exhibition and an artist talk at B#S Gallery, Treviso.

The residency is hosted by and organised in partnership with IoDeposito and supported by the i-Portunus pilot project funded by the Creative Europe Programme of the European Union, with the patronage of Treviso municipality.

BIO OF THE ARTIST LORENZO BORDONARO:

Lorenzo Bordonaro holds a BA+MA in social anthropology (Università di Torino, Italy) and a PhD in Cultural Anthropology (ISCTE, Lisbon). He was post-doctoral researcher at IUL-ISCTE (Lisbon), at Sergipe Federal University (Brazil) and UTAD University (Portugal). He conducted ethnographic research in Guinea Bissau, Cape Verde, Portugal and Brazil on several issues, from childhood to youth violence, from creativity and urban marginality to migration and development in African contexts. He lectured anthropology at grad and post-grad levels in Portugal, Cape Verde and Brazil. He studied painting and drawing at ArCo (Lisbon) and is presently MA candidate in Sculpture at the Academy of Fine Arts in Lisbon. His artistic practice merges with the anthropological research: his installations and public art projects are often rooted in a wider social reflexivity and in political activism. He carried out projects in different social contexts and geographical areas: from Brazilian favelas to shanty towns at the periphery of Lisbon; from the Cape Verdean ghettos to the historical neighbourhoods of Graça and Mouraria, in Lisbon.He participated in several events, festivals and collective exhibitions, among which the Architecture Biennale in Venice, Manifesta 12 in Palermo and Ethnographic Terminalia in Chicago, US.