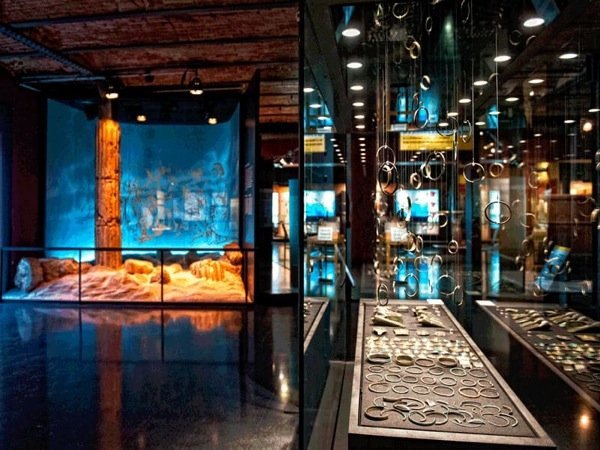 The Bell of Artillery Echoes and The Bell of War Soundscape, part of the sound art installation “Insight” by Joshua Cesa (audio tracks by Alessio Sorato and Lorena Cantarut), are actually in the official collection of the Museu d’Història de Catalunya: A SPECIAL EVENT IN BARCELONA, IN THE WEEK END OF THE 10th and 11th NOVEMBER 2018, to introduce the artwork to the Catalan audicence.

Insight is a work of sensory art realized by the artist Joshua Cesa in collaboration with the sound artists Alessio Sorato and Lorena Cantarut, the installation is curated by Chiara Isadora Artico, and freely inspired by Frederic Pujula’s book “El Tabac”, curated by Francesc Montero, and from the book “From The Front” curated by Tancredi Artico.
The installation consists of an auditory reinterpretation of phenomena to be found in the literature of the First World Wars, which emerged from books and diaries written by those who witnessed the conflict.
In particular, the artwork aims to bring the sensory sphere of the war closer to the audience, revealing the sight as misleading and the hearing as an atavistic means of salvation.
Through an in-depth analysis of the sensory dimension described in the memoirs of the First World War, the artist, together with the researcher Tancredi Artico, identified an ‘inversion’ of the spheres of sight and hearing normally meant in civil life.
Infact, it is on the basis of the polarity deceitful sight / redeeming hearing, that the work of sensory art was conceived. At a subsequent stage of the creation process, the realization was entrusted to the sound artists, who translated the sensory memory into actual sound.

Thought to be site-specific, the pilot version of the sound installation was located inside the Bombi gallery, a long pedestrian tunnel that runs across the city of Gorizia, passing under the Castle and connecting the Italian city with the Slovenian Karst.
The installation was presented as an enveloping auditory and visual pathway, articulated in seven ‘sensory stations,’ seven ‘auditory bells’ suspended in the air: the bells followed one another along the whole length of the gallery, suggesting a pedestrian path.

The single bells that made up the Insight installation, traveled around the world: the artwork, rich of a profound human universal value, was exhibited not only in Italy and Slovenia, but also at the National World War I Museum and Memorial in Kansas City (USA), at the National Art Gallery in Windhoek (NAMIBIA), at the Mosede Fort and Museum (DENMARK).
Today, The Bell of Artillery Echoes and The Bell Of War Soundscapes find a stable home in the Museu d’Història de Catalunya: this is the most suitable place to host the bells permanently, because these “auditory stations” were strongly inspired by the important leterary testimony of Frederic Pujulà, curated and studied by Francesc Montero (University of Girona), one of the rare Catalan testimony from the front of the Great War: in his book of war “el tabac”, Pujulà is among the few to consciously realize the importance of salvation thorugh hearing.

The Bell of Artillery Echoes is inspired by the passage of the book in which Pujulà, together with his fellow soldiers, fights repeatedly hiding in a cave: the sound of the cannons reaches his amplified and vibrating ears, mixed with the vibrations of his own afraid body, evocating his fear of dying.
The bell of war soundscapes, instead, refers to the passage in which Pujulà understands the importance of knowing how to interpret the sound landscape, in war, for his own salvation: “the noise, the screams, the thrusts, commands, curses, songs, the clinking of metal, had something infernal and surprising”.

INSIGHT was the first project by Joshua Cesa to be supported by SILLUMINA, SIAE e MIBACT: during the opening, a special moment will be dedicated to present the experience of the artists in the participation to the SILLUMINA’s calls, and particularly promoting the new installation created through them: the land artwork SEGNI!