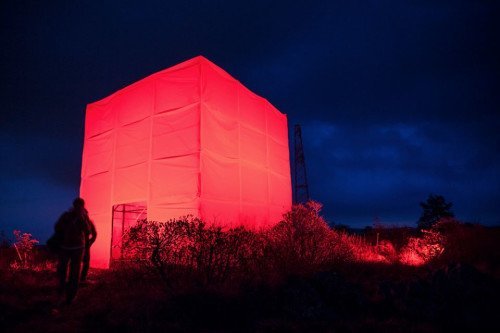 The art installation iN-CUBO, is made by the artist Joshua Cesa, who wanted to remember the loss of life of this territory, by designing this new monument: it is a symbolic red cube, whose volume can contain the blood of 100,000 deaths (those victims who were buried in the famous Redipuglia Memorial). The installation reproduces in a conceptual and figurative key the volume of blood shed by the people of the Carsic region during the first conflict, becoming a new ‘monument’ based on the idea of organic and alive memory. The installation was built on the Carso upland, between the National Redipuglia Memorial and a ‘Dolina’ used in the First World War as a trench: the Carso was a borderline territory, severely torn from both the Italians and the Austro-Hungarians during the conflict. More than half of the people who lived near the Carso have died in the Great war, and the upland’s rugged ground has been kneaded with their blood.