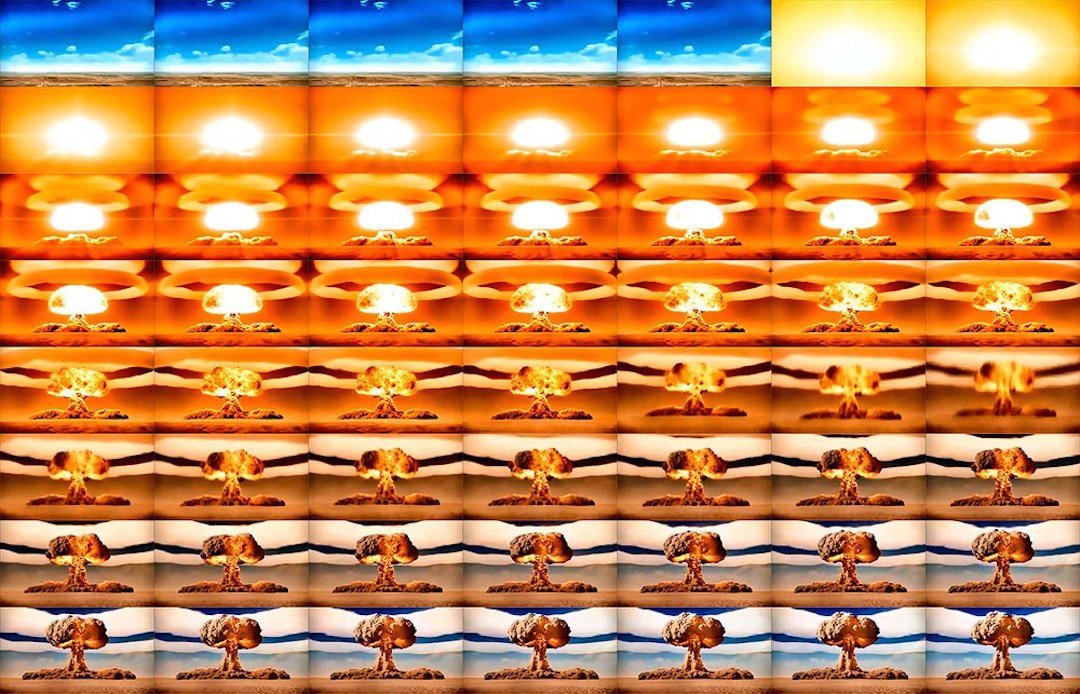 After Hiroshima (And beyond) is an exhibition that brings together international artists in a joint and multifaceted reflection on archetypal imagery related to the atomic bombings of Hiroshima and Nagasaki – respectively on August 6th and 9th, 1945 -, and its reworking in contemporary art and cinematography.

The exhibition concentrates on works of artists who, by using different media (cyanotypes, paintings, collages, photographic manipulations and video installations), rework these images in an original way: a poly-focal investigation that focuses on the legacies of those tragic events.

Three are the images in question: the blinding flash of radioactive light; the iconic image of the atomic cloud, or mushroom cloud; the shadows of bodies and objects projected on roads and buildings. True archetypes of fear in the Japanese and international imaginary, these images stimulated artists and film directors in drawing a personal re-elaboration, with the intent of exorcising their deadly and destructive nature.

Elin o’Hara Slavick in her cyanotypes re-illuminates objects of daily use affected by radiations, while Andrew Cole captures the flash of light and paints the black rain of death that poured over the city. At this point of the exhibition, we find the two cinematic works “Black Rain” and “Children of Hiroshima”, that represent realistically the day of the explosion. If Deimion van der Sloot depicts the atomic light from a scientific and minimal point of view, Uroš Weinberger, through a strange use of colors, intends to denounce media strategies that distort information and images related to current events.

The atomic cloud was the second image that appeared in the eyes of the survivors. Daniel Wechsler reinterprets the chromatic and sound components of a military video portraying the release of the nuclear bomb on the city of Hiroshima; in a photographic manipulation, Gordon Belray instead presents the frames from a military film on the bomb’s release on Nagasaki, recreating the historical dimension of the incident.

With a series of video artworks, Kailum Graves focuses on the very image of the mushroom cloud, that degenerated into the atomic aesthetic of the familiar (denouncing its kitsch component).

Even today the material memory of what happened lasts, through the nuclear shadows impressed on the city, which still witnesses the destruction and the pain that followed. Elin or Hara Slavick‘s cyanotypes create an invisible bridge between the generations of hibakusha. Luca Federici, on the other hand, reworked in a provocative tone the image of the shadows, representing with primitive power a subject that still requires to be plumbed in its terrifying components.

Here there are some cinematographic contributions from the new wave of Japanese horror – Kurosawa Kiyoshi is one of the major exponents of the genre -, linked to a renewed interest in the iconography of the shadows, that incarnates the tragedy of Hiroshima trauma.

At the end of the exhibition, Mary Kavanagh combines different video-photographic materials, stimulating a reflection on the historical fracture due to armament and the consequent nuclear culture.

Thanks to our patrons: Maypole Foundation, UNESCO, Hiroshima Peace Memorial Museum and archive.