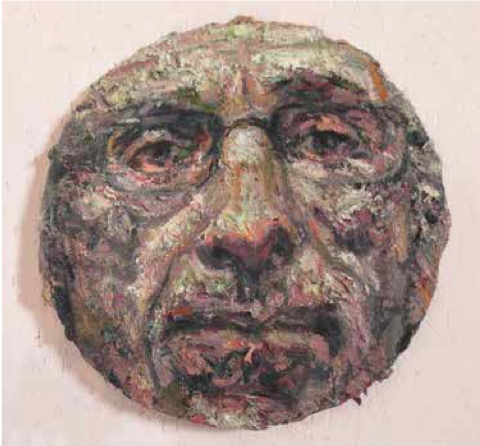 Aleksander Velišček (born in 1982 in Šempeter pri Gorici, Slovenia) is a Slovenian painter who lives and works between Venice and Nova Gorica.

He holds a BA in Painting and Visual Art from the Fine Art Academy of Venice and during 2010 was an artist of Atelier Fondazione Bevilacqua la Masa in Venice. He recently participated, during the year 2015, to other several residencies such as Cité Internationale des Arts – in Paris, Dolomiti Contemporanee – in Borca di Cadore and VIR Viafarini-In-Residence. Viafarini DOCVA in Milan.

His personal experience strongly influenced the interests of his work: he grew up in times of intense political and economic changes and, moreover, he currently lives in Nova Gorica, a border city, symbol of the division between East and West, that, because of its location, was a place where the artist could first-hand experience from social, to economic and ideological transformations of the ex Yugoslavia and of the emerging Slovenia.

Infact his artworks deal with issues connected with history, politics, economics but he is also interested to the mediatory power of the images through the research on the human figure, on the physicality of the body, on its gestures and proportions.

He took part in several group exhibitions, included SHIT AND DIE at Palazzo Cavour in Turin (2014), Biennale Architettura Venezia 2016 at the Albanian Pavilion, ArtVerona 2016, Stories from the Edge that took place at Galerija Kortil, in Rijeka and at Kunsthaus Graz.

He participated to the B#Side War Festival in its first edition (2014-2015) for the exhibition Esperienza e Povertà della Guerra at Villa Manin in Codroipo.