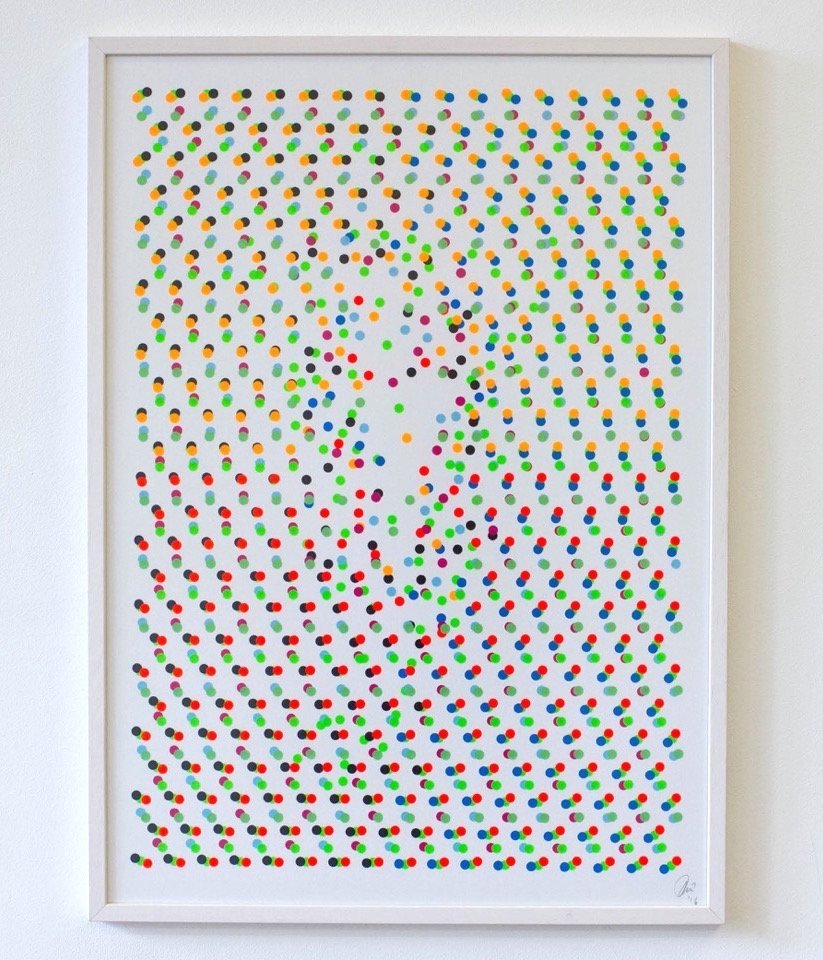 Deimion Van Der Sloot (Utrecht, 1986) grew up on a bio-dynamic farm in South America and came from Argentina at the age of 16 to finish his high school.
In 2010 he graduated as graphic designer at the School of the Arts in Utrecht. He then began to work as a graphic designer at Studio Zijspan where he worked for different clients and initiated their own projects. Besides traditional graphic design he was always looking for interesting expressions between visual arts, design, performance and installation.
Since 2015 Deimion decided to focus on his autonomous interests which he does under his pseudonym ‘Peim’. With notable and distinct materials, vibrating colors, patterns and compositions he’s been producing work at an impressive rate. Through a wide range of graphic techniques including collages, silkscreen and print he is ‘tricking’ the visual perception of the viewer questioning its reality, space and time. The performative aspects of his work are not ignored but rather encouraged.
Deimion also works as a teacher in visual arts and graphic design. He taught at the Modern International Arts and Design Academy in China, and organized together with Wijkwinkel Collective the monthly cinema event Cinemaandag at Kapitaal in Utrecht.
http://peim.nl/peim/

“In Rotation’s Logic (Atomic explosion), when a single free neutron strikes the nucleus of an atom of radioactive material like uranium or plutonium, it knocks two or three more neutrons free. Energy is released when those neutrons split off from the nucleus, and the newly released neutrons strike other uranium or plutonium nuclei, splitting them in the same way, releasing more energy and more neutrons. This chain reaction spreads almost instantaneously.
In nuclear physics and nuclear chemistry, nuclear fission is either a nuclear reaction or a radioactive decay process in which the nucleus of an atom splits into smaller parts (lighter nuclei). The fission process often produces free neutrons and gamma photons, and releases a very large amount of energy even by the energetic standards of radioactive decay: this is the phenomena represented in Would it explode or implode in space?”
Deimion “Peim” Van Der Sloot