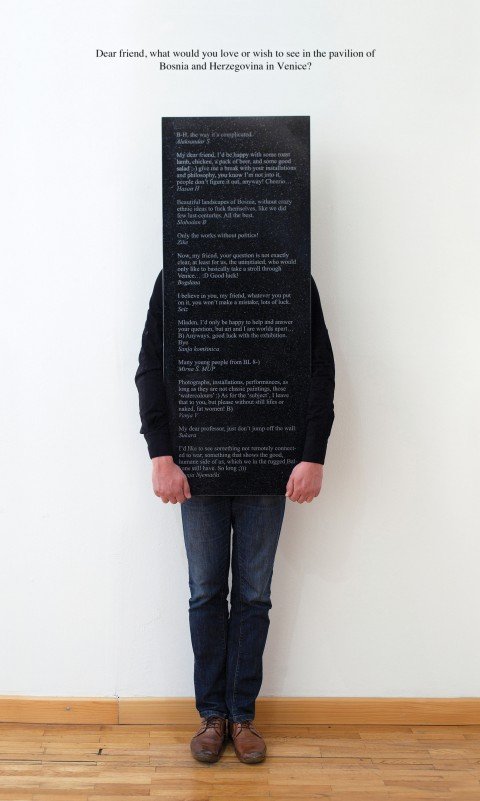 Mladen Miljanović (born in Zenica, Yugoslavia, in 1981) is a Bosnian artist that currently lives and works in Banja Luka as artist and professor at the Academy of Fine Arts.

After the secondary school he attended the Reserve Officer Military School where he earned the rank of Sergeant. As a Sergeant he trained 30 privates. After the accomplishment of the military term he enrolled at the Academy of Arts in Banja Luka. The consequences of war and the knowledges gained at the military school, made the basic field of reference in his work as an artist.

In his artworks he uses different medias, from performances to installations, starting on his own life experience he focuses on the social matter related to history, its influence on the present state of things and the transformation it implies on a certain place, concentrating his reflection also on the role of art and on how it can change our idea of reality.

He is interested in the relation between the individual and collective as in his projects Happening Balkana 2005, on ethnic re-socialization in Bosnia and The pressure of Wishes for the Bosnia ed Erzegovina’s pavillion at the 55th Biennale of Venice that tries to portray the cultural and social situation of his country by gathering the citizens’ desires.

He has held many solo shows and has took part to many group shows, both in Bosnia and abroad, such as the recent group shows Mediteranean Cost, at the FRAC in Marseille (2016), Cold Front from The Balkans, Pera Museum in Istanbul (2016), In The Service of Your Care, 8th Floor gallery, New York (2016) and many others.

An emblematic performance of his approach – that he has the occasion to perform in several spaces around the world – can be At The Edge where the artist is hung at the cornice of the building where the exhibition takes place, putting himself in a transitional space between the brutal “outside” reality and pleasant artistic space inside.