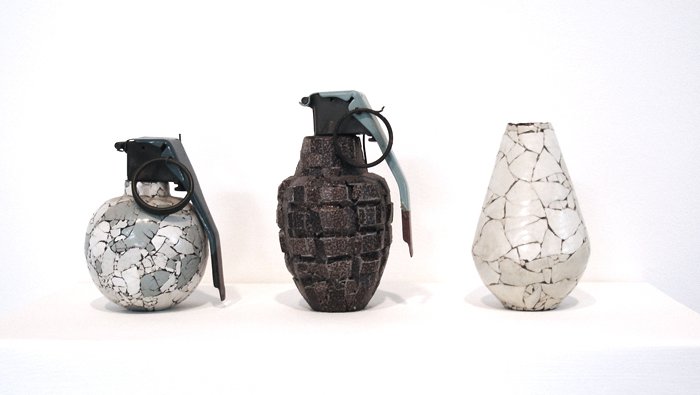 Anitra Hamilton (born in 1961 in Toronto) is a Canadian visual artist. Her work focuses on issues like territoriality, the destruction of war and conflicts, hierarchy and ownership, the examining of the history of violence through a critical skepticism perspective.

In her arkworks she makes an artistic use of eggshells creating a unique technique in which she uses this material to cover objects such as helmets, bombs and any other that underscores the fragility of the humankind – which nonetheless engages in viciously destructive activities.

Her works have been presented at the 8th Havana Biennale and at the 5th Marrakech Biennale, in group shows at The Centre For Contemporary Art Thessaloniki in Greece (2011), at Albright-Knox Gallery (2015), at the Toronto Urban Film Festival (2011), at the Trans-Siberia Art Centre of New York (2011) and at other spaces across North America. Anitra Hamilton held solo exhibitions at Zendai Moma in Shanghai (2008), in 2012 her project Wall Parade #3 was permanently re-installed at the Art Gallery of Ontario and at Georgia Sherman Project (2009-2012), the gallery which represents the artist.

Her works appear in the permanent collections of the Albright-Knox Gallery, the Art Gallery of Ontario, as well as corporate and private collections. The artist is the past recipient of numerous grants and awards including the Toronto Friends of the Visual Arts Award and two Chalmers Fellowships.

The body of work that I have developed over the past 20 years concentrates on recurring themes of territoriality, the destruction of war and conflicts, hierarchy and ownership, with the clear understanding that violence has and always will exist. The work does not express moral judgment or contain a naïve antiwar sentiment, but acknowledges the complexity of our reality. The projects develop from an inquiry into the human psyche though the investigation of primal psychological drives; such as our ability to create beauty and the constant desire to destroy. The emphasis of concealment within the work mimics our veneer of civility and refers to the paradox of good and evil inherent in all humans. The notion of seduction informs my work via the strategic employment of diverse materials to create a tactile or colourful surface which subverts the original function of the object, thereby luring the viewer towards the form and in the process being critical of and challenging the viewer’s attitudes and (optimistically) encouraging a transformation of thinking. I’m ultimately skeptical of the effect on the viewer. I offer no solutions, in our increasingly repressive climate; skepticism is a force more positive than complacency.